This is a guest post by Jim Arvantes. Jim is a writer, editor and photographer living and working in Washington, D.C. He has a particular passion for writing about politics, local business, and health care.

Cleveland Park resident Juliet Eilperin has spent 15 years covering environmental issues for the Washington Post, a beat that has taken her to some of the most beautiful and remote places on earth while giving her the opportunity to write a series of stories on climate change that recently won the Pulitzer Prize for Explanatory Reporting.

As an intrepid national correspondent, the Pulitzer Prize-winning journalist has traversed the wilds of the Alaskan tundra, ridden in the small baggage compartment of a Cessna plane and swam with sharks off the coast of the Yucatan Peninsula.

“I went swimming with sharks a lot – that was some of the best reporting I did, which was mainly for my book,” said Eilperin, the featured speaker for the Tuesday Talk on May 19, and the author of the book, Demon Fish: Travels Through the Hidden World of Sharks.

During the May 19 Tuesday Talk – the first one ever held online– Eilperin discussed her experiences as a national environmental reporter for the Washington Post, explaining the impetus for the Pulitzer Prize-winning series of stories on climate change known as 2C: Beyond the Limit, written by Eilperin and some of her Post colleagues. The series ran in the Washington Post last year.

Charles Fishman, an award-winning journalist, historian and author of four best-selling books, moderated the Tuesday Talk on YouTube Live, asking questions and steering the discussion from his home while Eilperin sat miles away at her residence, answering and expounding on questions and observations. More than 100 people tuned into the Tuesday Talk, posting questions and sharing remarks through a comments section on the YouTube channel. 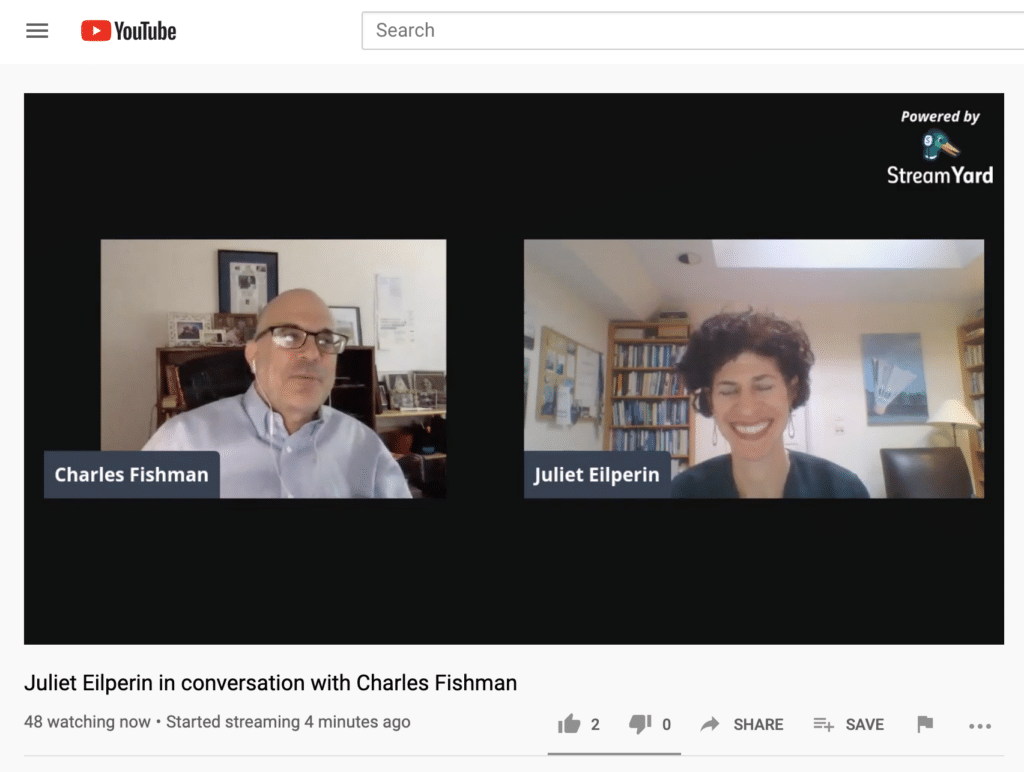 Fishman pointed out that Eilperin, “won a Pulitzer Prize two weeks ago.”

“Many, many great journalists go through their entire careers without winning any prizes, let alone a Pulitzer,” said Fishman, a three-time winner of the Gerald Loeb Award, the most prestigious prize in business journalism.

In describing the series on climate change, Eilperin explained that the Post formed a team of five reporters from various reporting desks who wanted to tell the story of climate change in a dramatic and vivid way that would resonate with the average person.

Since the United States and other national governments pledged in 1992 to keep the world from warming by 2 degrees Celsius, Eilperin and her colleagues sought to find every place in the world that has warmed by 2 degrees Celsius or 3.6 degrees Fahrenheit since pre-industrial times. As a potential tipping point, it provides valuable insights into “pockets of the future” that could eventually envelop the entire world, said Eilperin.

“This was one way we could show that extreme climate change had arrived,” said Eilperin.

Eilperin soon zeroed in on the Northern slope of Alaska, near the Arctic Circle, which has warmed 4 degrees Celsius since the pre-industrial era, making it the fastest warming place on the planet.

That part of Alaska is appealing for other reasons. It is an oil rich part of the world, enabling people to make a living by extracting fossil fuels, which, when burned, drives climate change.

To help tell the story, Eilperin and Post photojournalist Bonnie Jo Mount, travelled to the North Slope, landing in a small village called Nuiqsut, populated by 480 residents. On the last leg of the journey, Eilperin rode in a two-seat Cessna, tucked away in the luggage compartment while Mount and the pilot occupied the two seats.

Alaskan natives have lived in the Nuiqsut area for thousands of years, eking out a living as nomadic hunters for most of their existence. In the 1960s, drillers found oil in the region, creating an immediate demand for developing the fossil fuel.

The United States government and the Alaskan locals reached a settlement, allowing the indigenous people to claim millions of acres of land while leaving the rest for oil development. With the settlement, locals in the area abandoned their nomadic lifestyle and founded the village of Nuiqsut.

The discovery of oil has brought prosperity and modernity to the region, Eilperin noted.

“Even though we there in late May, (2019), it was cold, but everyone’s home is incredibly well heated,” she said.

It costs only $25 a month to heat homes in the area because oil giant ConocoPhillips subsidizes the oil.

But the drilling of oil also creates its own set of challenges. The residents of Nuiqsut still rely on subsistence hunting for half of their diet, and there are concerns that the oil drilling will diminish and perhaps even destroy much of the wildlife in the area, eliminating a vital food source.

At the same time, the little village is confronting tangible evidence of global warming. The area’s permafrost is melting, making many houses and buildings unstable. When walking through a graveyard in Nuiqsut, Eilperin and Mount stepped on pieces of cardboard placed on puddles left by the melting permafrost.

Eilperin said the series on climate change would not have risen to a Pulitzer Prize-winning level without the leadership of Post Editor Trish Wilson, Eilperin’s boss. Eilperin described Wilson as an “unbelievable editor” who came into the 2C: Beyond the Limit project “with fresh eyes, and really helped us as a team.”

As it turns out, Wilson is married to Fishman, making the Tuesday Talk “a bit of an odd pairing,” Fishman said.

Wilson often edits Eilperin’s stories while sitting at the kitchen counter in the morning with Eilperin’s voice coming out of a loud speaker, and her kids running around.

“Juliet is an informal member of our family, and it has been a privilege to watch this great journalism take place at the kitchen counter,” said Fishman.

Fishman refers to Eilperin as a “journalist’s journalist,” one of the hardest working correspondents in the country. Juliet began writing for the Washington Post in 1998, covering the House of Representatives and then the White House, eventually moving to the environmental beat. (Eilperin is the author of Fight Club Politics: How Partisanship is Poisoning the House of Representatives.)

In the five days leading up to the May 19th Tuesday Talk, Eilperin had four stories printed in the Post, including a story she finished writing about 45 minutes before the Tuesday Talk, which ran on the Post website that evening.

“There are not many reporters who have been at the Washington Post for 22 years who work that hard,” said Fishman.

Fishman’s favorite story about Eilperin took place when she was a university student at Princeton University. Eilperin decided she wanted to be a journalist between her junior and senior years, and like most young, aspiring journalists in college, Eilperin wanted a great summer internship.

Eilperin got the number for the New York Times bureau chief in Managua, Nicaragua, and called him from her Princeton dorm room, asking him if she could work as his intern if she could get to Managua.

The Times transferred the bureau chief to Mexico City and Eilperin followed him there, spending her summer internship working for the Times in Mexico City.

“There are not many journalists or future journalists who have that kind of determination, creativity and sort of directness,” said Fishman. “That is Juliet Eilperin.”

Eilperin credits her grandmother for much of her determination and directness. Her grandmother, Maria Cook, lived in Nazi-occupied Budapest, Hungary, during World War II, working as a secretary and using her connections and resourcefulness to hide family members from the Nazis and the Budapest government, which was collaborating with the Germans.

“She made sure to hide my mother who was quite young, and my uncle in one place,” said Eilperin.

She hid other relatives in other locations, saving them from a certain death. Tragically, Eilperin’s great grandmother and great aunt were killed at the very end of the war.

“My grandmother did heroic things to help see my family through the war,” said Eilperin. “She was an unbelievably determined person.”

As a Jew and a women in Budapest, Maria Cook had few opportunities, but she was determined her children and grandchildren would have the chance to pursue the life they wanted.

“She was kind of the first audience I wrote for,” Eilperin said.

Maria Cook was also “someone who managed to survive against great odds and was never deterred,” Eilperin said.

“That is something that has absolutely influenced me in my approach to life and work,” she added.

Jim Arvantes is a writer, editor and photographer living and working in Washington, D.C. He has a particular passion for writing about politics, local business, and health care.